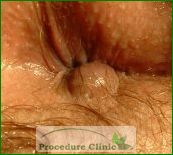 Rectal bleeding refers to the passage of red blood from the rectum and anus, often mixed with stool and/or blood clots. The severity of rectal bleeding varies widely. Most rectal bleeding is mild and intermittent, but it also may be moderate or severe.

Rectal bleeding can be caused by various conditions, but even the slightest amount of bleeding should be taken seriously. Common causes of bleeding are internal hemorrhoids, ruptured thrombosed external hemorrhoids, fissures, diverticulosis, colon cancer, colitis, polyps and angiodysplasias. Patients of older age or with significant family history of bowel disease or cancer should consider further examination. In addition, patients who were previously treated for rectal bleeding but continued to experience bleeding must be further examined.

The source of rectal bleeding is determined by history, physical examination and blood tests, assisted with anoscopy, sigmoidoscopy, colonoscopy, radionuclide scans, and angiograms.