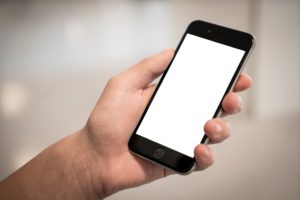 The average American spends over five hours per day scrolling through Instagram feeds, checking Twitter, answering emails and texts, and watching Netflix—all via smartphone devices and, more often than not, while sitting. Add in the extra layer of using these mobile devices during bathroom trips, and most of us have significantly increased our risk of developing hemorrhoids.

A 2015 survey found that 9 out of 10 people bring their mobile device with them to the bathroom, a habit that leads to unnecessary extra time on the toilet. While doctors recommend that you spend no more than 10 minutes at a time sitting on a toilet, being absorbed in the contents of your phone can easily extend that window to 15-20 minutes or longer.

This prolonged sitting time can then cause excess pressure on your rectal veins and increase your hemorrhoid risk. Additional straining may also cause existing hemorrhoids to engorge, swell and bleed. In general, your bowel movements should last somewhere between 3-10 minutes, as anything longer may indicate constipation.

Furthermore, another major concern of using mobile devices in the bathroom is the risk of fecal contamination. A 2017 study of high school students’ smartphone usage showed that these devices can cling to E.coli and other bacteria, potentially making mobile devices even dirtier than toilet seats. Gross.